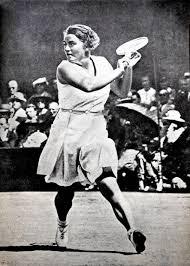 Welcome to sportswoman's site of

She was one of the most prominent Polish tennis players and athletes in general. She was born on 15 October, 1912, in Cracow. She was a multiple Polish champion (65 titles in singles and doubles) but the greatest successes came on the world court. Jędrzejowska was the finalist of Roland Garros (1939), Wimbledon (1937) and US Open (1937). She won the Grand Slam doubles title in France, in 1939. She was an active player from 1927 to 1966 (exept the years of the World War II). Her best shots were forehand, kick serve, smash and backhand dropshot. Jędrzejowska, often called Jed or Ja-Ja (since her name was difficult to pronounce), was a very cheerful person. She smiled even if she lost the match. She died on 28 February, 1980.