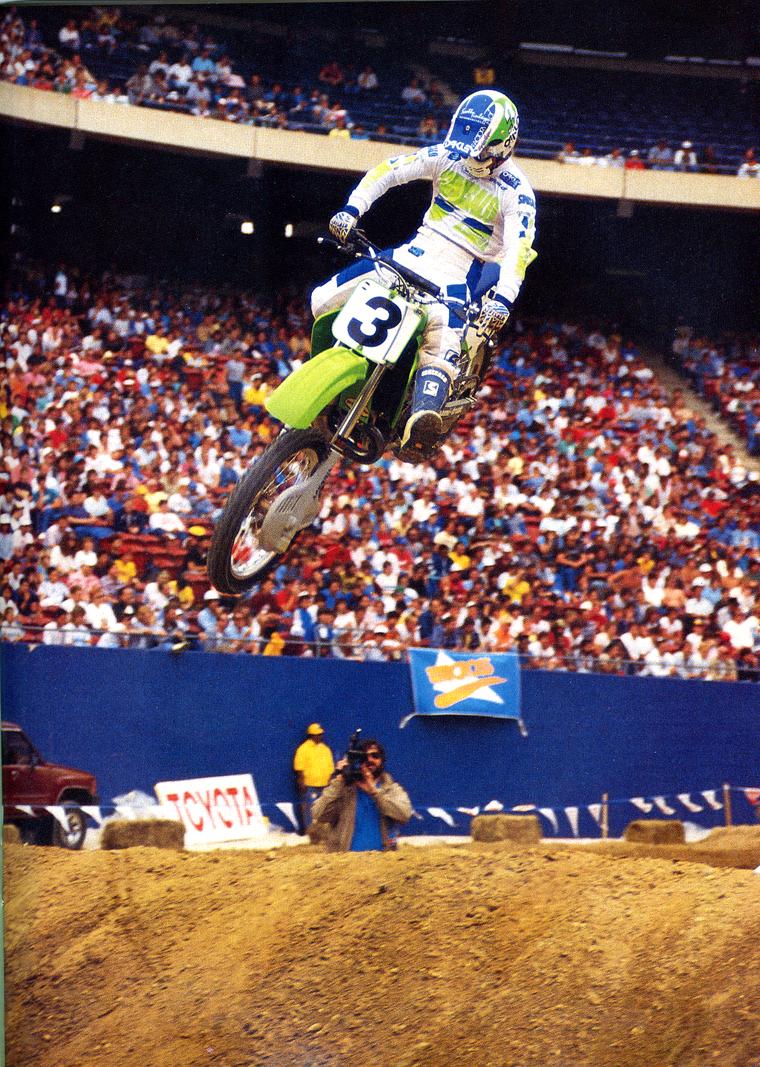 Jeff Ward will be remembered as one of the all-time greats in motocross. 'Wardy' won seven AMA national championships and proved to be perhaps the most versatile rider in the history of the sport, winning 125cc, 250cc and 500cc national motocross titles.

After he was inducted into the Hall of Fame for his motocross success, he further proved his versatility by winning the 2004 AMA Supermoto Championship.

During his motocross career, Ward won a total of 56 AMA nationals, placing him third on the all-time motocross/Supercross win list at the time he retired from motorcycle racing in 1992. He had one of the longest careers of elite motocross riders, covering 15 seasons in the pro ranks.

Ward was born in Glasgow, Scotland on June 22, 1961. He moved to America when he was 4 years old. Riding motorcycles was a part of Ward’s life early on. He was part of the minicycle craze that swept Southern California during the late-1960s and early 1970s. He began racing minicycles and became the best minicycle rider of his era, and some believe of all time. When he was just 10 he had a bit part in the classic movie “On Any Sunday,” doing a long wheelie on his little Honda 50.

Ward joined the professional motocross ranks in 1978 riding an FMF-backed Suzuki in the 125 class. He earned five top-10 finishes and finished his rookie season ranked a very credible seventh in the series.

In 1979, he moved to Kawasaki and would remain with that team throughout the rest of his career. That year, he again took consistent finishes in the 125 class, ending the season ranked sixth. The year was highlighted by his first podium finish – a third overall in a 125cc outdoor national in Houston. Ward got his first taste of Supercross racing in ’79, also by racing in select events. He actually led parts of the final at the Los Angeles Coliseum, which bolstered his confidence immensely.

Ward continued to progress steadily through the ranks. In 1980, he finished third in the 125 motocross standings and earned his first Supercross podium finish (a third at Seattle). In 1981, he took third again in the 125 series, and in 1983 he finished a very close runner-up in the 125 series to Johnny O’Mara.

Ward won his first AMA national (in the 125 class) on April 18, 1982 at Lake Whitney, Texas. He proved that the win in Texas was no fluke by winning again at Washougal, Washington — a track he called his favorite.

For Ward, 1984 proved to be a breakthrough season. He started the season by winning his first Supercross race at the Kingdome in Seattle. In all, he won four Supercross finals that season. He then hit the ground running in the 125 outdoor series, winning an amazing eight of the 10 nationals and earning his first AMA national championship. It marked the first 125cc national title for Kawasaki. Winning the ’84 AMA 125 Motocross Series was the culmination of seven years of hard work and persistence on the circuit, and it also proved to be just the beginning of Ward’s run of championships.

The 1985 season proved to be Ward’s finest. He was in his prime and it showed. Ward finished in the top five in eight of the 11 rounds, including a victory at Houston, to edge out Broc Glover by just two points to win his first Supercross championship. He then went on to prove that he could win on 250cc bikes in the outdoor series by winning five 250 nationals and earning the 250 title. Like he had done the year before in the 125s, Ward’s 250 title marked the first AMA 250 National Motocross championship for Kawasaki.

Ward came back and won his second AMA Supercross championship in 1987 over Rick Johnson. En route to the title, he won five races and finished on the podium in 10 of the 14 rounds. The rivalry with Johnson continued in 1988 in the 250 motocross series – both Ward and Johnson won three races, but it was Ward nudging out Johnson by seven points for the championship.

Looking for new challenges, Ward moved up to contest the 500cc national motocross series. He won two championships on the 500s in 1989 and 1990. His 56th national victory came in the 500cc class at Delmont, Pennsylvania, on September 27, 1992. Those two titles brought his total number of AMA national championships to seven, tying Bob Hannah and Rick Johnson for the most motocross/Supercross championships. Ward retired after the 1992 season.

Beyond his domestic successes, on the international level Ward also became one of the elite riders by being part of seven winning U.S. Motocross des Nations teams.

After retiring from motorcycle racing, Ward began a new career automobile racing. He came within a few seconds and a yellow light of winning the 1997 Indianapolis 500 in an exciting race that saw him finish third. He won the prestigious Indianapolis 500 Rookie of the Year Award.

Later, he returned to professional motorcycle racing in his 40s, competing in the new AMA Supermoto Championship and winning the title in 2004 against riders half his age. Demonstrating his incredible versatility as a racer, Ward even turned a few practice laps at Daytona International Speedway on a Formula Xtreme racebike in a 2005 tire test session. Incredibly, in his first time ever on a road race course, he lapped within 10 seconds of Miguel Duhamel, who would go on to win the Formula Xtreme championship in 2005.

When Jeff Ward started his professional career, many said that at 5 feet, 7 inches tall, he would have a tough time handling the tall pro-level motocross bikes. Despite his smallish stature, Ward proved that he could win on any type of track and on any size of motorcycle.