Roberts is regarded as being one of the first riders to use his knee to balance the bike on the track in corners, and the first to use engine power to spin the rear tyre exiting bends to help steer the bike (a technique known as "throttle steering", common among U.S. flat track racers). These techniques are used everywhere in the top levels of motorcycle road racing, though they are much less exaggerated with today's improvements in tire technology.

Roberts made a name for himself by battling the dominant Harley-Davidson factory dirt track team aboard an underpowered Yamaha in the U.S. Grand National Championship, a series which encompassed events in four distinctive dirt track disciplines plus road racing. He made up for his bike's lack of horsepower with an almost fearless, determined riding style. This fearless style was highlighted in 1975 when Roberts competed at the Indy Mile National aboard a dirt track motorcycle with a Yamaha TZ 750 two-stroke road racing engine wedged inside its frame. On a bike that was considered unrideable due to it's excessive horsepower, Roberts came from behind on the two-stroke, and overtook the factory Harley-Davidson duo of Korky Keener and Jay Springsteen on the last lap for one of the most famous wins in American dirt track racing history. Afterwards, Roberts was famously quoted as saying, "They don't pay me enough to ride that thing."

Roberts ventured to Europe in 1978 to compete in the World Championship Grand Prix series. He surprised many observers by winning the 500cc crown in his first attempt, despite having no prior knowledge of the European circuits. Roberts was also known for his epic battles with British racing legend, Barry Sheene, and subsequent Grand Prix World Champion, American Freddie Spencer. His season long battle with Spencer for the 1983 500cc World Championship, in which they each won 6 races, and that culminated in a last lap collision at the penultimate round in Sweden, is considered one of the greatest seasons in motorcycle Grand Prix history, along with the 1967 500cc duel between Mike Hailwood and Giacomo Agostini. In a fitting end to a great career, Roberts won his last race in the final meeting of the 1983 season, the Italian Grand Prix.

Roberts is also remembered for being one of the first riders to take up the cause of rider safety. When Roberts arrived on the Grand Prix scene, motorcycle racers were competing at venues like Imatra in Finland that featured railroad crossings and hay bales wrapped around telephone poles. Roberts adopted a confrontational, sometimes beligerent stance with race promoters, challenging the previously accepted poor treatment that motorcycle racers of the day were accustomed to receiving. He organized a rider's revolt and threatened to start a competing race series called the World Series to challenge the FIM's monopoly on championship caliber motorcycle races. Though the competing series failed to take off, it forced the FIM to take the riders seriously and make changes regarding their safety.

After his racing career ended in 1983, Roberts turned to team management, guiding such riders as Eddie Lawson, Wayne Rainey, Luca Cadalora and others to race wins. As Team Yamaha's manager, Roberts won three 500cc World Championships with Rainey and one 250cc World Championship with John Kocinski. During the mid 1990s, Roberts became disillusioned with being the "in-between" man on the team, frustrated at the Japanese way of running race teams [citation needed]. The race bikes were leased to him and was often not allowed to make changes necessary to win. As a result, Roberts made the decision to build his own bikes. The venture was not as successful as his Yamaha years but proved he could do it. The team was backed by Proton of Malaysia and well funded, but the results were not as hoped and the backing faded. A hight point came with the introduction of four-strokes in MotoGP; the Roberts bike was beating the old two-stroke lap times at some circuits and earning front row qualifying spots against the other factory four-strokes.

The team is still running in 2006 and, ironically, is going back to a Japanese supplier. Honda will provide the RC211V V5 engine with the frame being designed by Team Roberts. It will be ridden by 2000 World Champion Kenny Roberts Jr, the first son of a World Champion to win the World Championship. 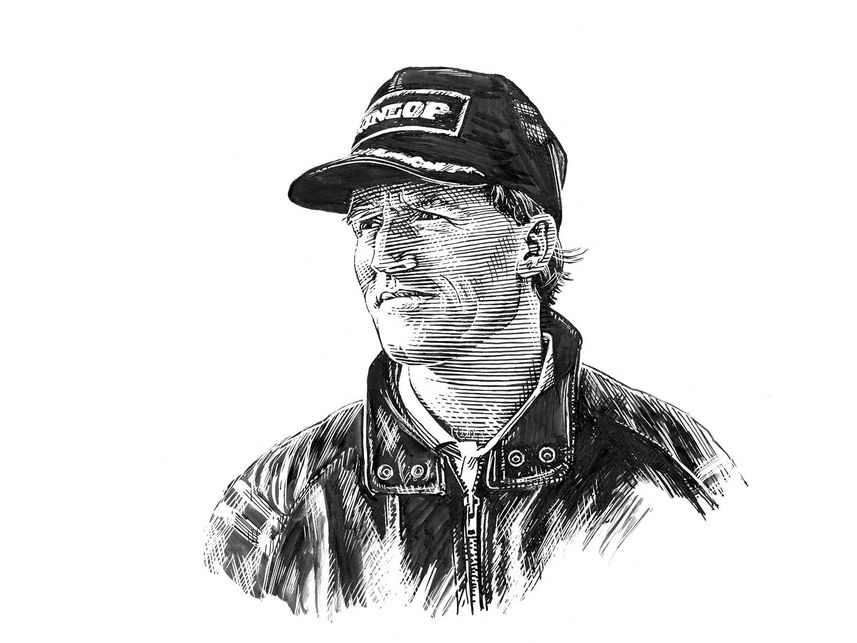 "The only thing I was really worried about was learning the racetracks and winning races."Kent Barton
A two-time ama grand national champion, Kenny Roberts took it upon himself to make a run at the 1978 500cc Grand Prix World Championship as a rookie. And he won it. Then Roberts won again, in 1979 and 1980. Brash, confident, and driven to a fault, Roberts came, saw, and conquered, and in the process, he positioned America as the world's preeminent Grand Prix superpower for a decade and a half.

Before you even showed up in Europe to make a full-time run at a 500cc World Championship, you let it be known that the Grand Prix riders didn’t intimidate you on any level whatsoever. Thoughts?

I went to do Imola right after winning in dirt track at Ascot Park. When we landed in Milan in Italy, I told a group of reporters: “Giacomo Agostini? Why is he so great? Bullsh-t. He never rode the 8-Mile National. I never saw him win Ascot.” I pissed everybody off. The press went crazy. Kel [Carruthers] had to drag me away. When we hit the Imola track, I was going to kick his ass. I said, “Bring it on, dude!” You had to really be on your toes at those Ascot races. Because the track was so tacky, you didn’t need a perfect bike—you didn’t need a Harley-Davidson to win the race. You could win on a Yamaha if you knew how to ride it better than anyone else. Ascot was really fierce at that time. So, when I was at Imola, everyone kept saying, “Agostini! Agostini!” So I said, “Well, I’ve never seen Agostini race Ascot, so I don’t know how good he is.”

You marked your first full 500cc World Championship season in 1978. That year, you won three races and took rival Barry Sheene down to the last race of the year to win your first World Championship. What was that like?
The problem at that time was that I only had one motorcycle. I was a support rider. I wasn’t a factory rider. The big problem I had was that the Goodyears I was using had never seen the racetracks of Europe, and so I had to test tires and learn the racetracks in that first year. It was so different then. Not only did I have the European thing to think about and worry about, but also two kids and a wife and a motorhome. It was a hell of a year. Luckily for me, I didn’t think about any of that stuff. It wasn’t on my radar. The only thing I was really worried about was learning the racetracks and winning races.
Along the way, you got tapped with the nickname “the Martian.” What was that about?

They still call me that in Europe. I’ll check into a hotel or be at the airport, and someone will say “Marciano!” That is Spanish for Martian. It stuck. Why do they call me that? I think it started in Spain because I was passing people on the inside and on the outside. In Grand Prix racing at that time, they didn’t see that very much. They saw some of the things I was doing in passing guys on the outside and all of that, and said, “This guy is not from this Earth. He must be a martian.” That stuck.
Racing in your era compared with MotoGP today. Are they as radically different as they seem?

Oh, yeah. It’s professional now. It’s what I wanted it to be when I was there. We were getting paid peanuts. And the racetracks were dangerous; nobody gave a shit about that either. I got to thinking, Why can’t this be the way it should be? Everyone would then say to me: “Well, you’re an American. You can say that.” I never figured that out until later on in my life. The problem there was that these riders from other nations, their federations would help them. Their federations had skin in the game. And the AMA, well, they hated me. Why would they help me? I think without me saying the things that I did at that time, I don’t know when motorcycle racing would have gotten professional to the point that it is now. They’ve done a great job with what they’ve had to work with. It was a pretty rocky road to begin with Dorna, but they pulled it out of the hat.

You’re the father of 2000 500cc World Champion Kenny Roberts Jr. How does that feel?
That’s probably the thing I think about the most. That was all a lot tougher on him than it was on me. When we started racing, I said to him: “You’re never going to be as good as me, even if you’re better than me.” People are always going, “Oh, he’s not as good as his dad.” Kenny got a lot of that, and I told him: “If you can handle that, you can race. If that’s going to bother you, I’d just as soon you not race.” It didn’t bother him at all. I don’t know how it didn’t, but it didn’t. That’s the achievement I’m most proud of.

"They saw some of the things I was doing in passing guys on the outside and all of that, and said, 'This guy is not from this Earth. He must be a martian.' ”
komentarzy 0 komentarzy ukryj komentarze 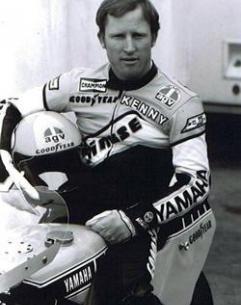